Hello everyone, Jess here.  Today I won the late summer vegetable bingo.  Usually once a year, the sharebox houses all the ingredients I need to make the fabulous French vegetable dish known as ratatouille.  Today’s the day, folks! 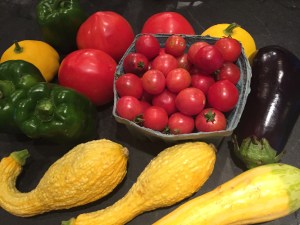 There are many variations in ratatouille ingredients, but the usual suspects include eggplant, squash and/or zucchini, tomatoes, peppers, and herbs such as thyme, basil and/or parsley. This dish screams “late August CSA!”

There are also different schools of thought regarding how to make ratatouille. Some folks believe that dicing and tossing all the veggies together is the way to go. Some believe instead that the vegetables should be cooked separately and then combined. I learned how to make ratatouille from The Joy of Cooking, who’s adaptation leans toward the latter method. I find that  this method really does maintain the flavor of each veggie more so than the “all-in-one” method.  Both taste good, it’s personal preference I think.  In fact, my ratatouille tastes different each time I’ve made it depending on how much of each veggie I have on hand.  I’ll include the Joy of Cooking specifications for comparison.

Today’s bounty was squash-heavy, so this dish is a little yellower than my last version, which was heavier on the tomato and eggplant.  Whatever the ratio, this combo of veggies complement each other pretty nicely. 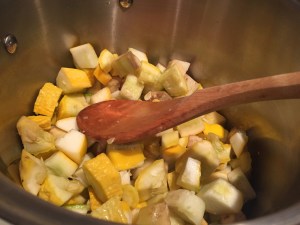 I peeled and diced my eggplant and squashes into one inch chunks (if you like the eggplant more “solid” in your dish, feel free not to peel them, especially the smaller more tender ones.) Next they went into the pot with Amish roll butter and olive oil. 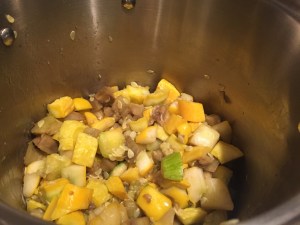 I only used about 1 tbsp of oil and butter. The Joy of Cooking suggests high heat and 1/4 cup of olive oil, hence you can use more oil or butter and cook these to a gold brown in a skillet. They became tender but not as “golden” in my pot here. 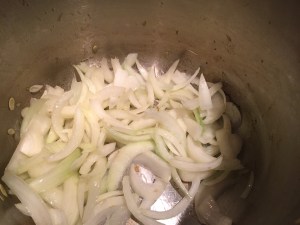 Next, 1 onion went into the pot solo. 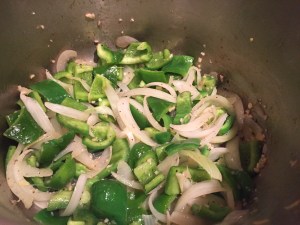 As the onion began to soften, 2 green peppers, salt, pepper and about 4 cloves of minced garlic joined the party. 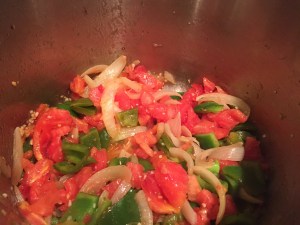 Once this mixture is tender, add your peeled and diced and seeded tomatoes. (I find seeding to be optional. If it’s too juicy in the end, you can drain the dish as needed.) Also add herbs, including thyme and a bay leaf. 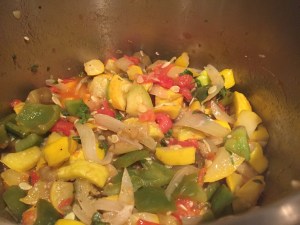 After a few minutes of that, stir in the eggplant and the squash before a final simmer until tender. Stir in basil and serve! 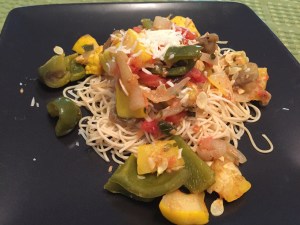 Serve it hot, serve it cold. Serve it as a side, toss it in a quesadilla or traditional crepe, in a calzone, or on a pizza with some good cheese. Try it on top of a bed of pasta, like so. This dish is awesome the next day, much like leftover chili. Tomorrow, I will try stirring in some Springdell Italian sausage.  The Joy of Cooking shared another adaptation with sausage and corn (and I do believe Farmer Jamie indicated we’ll be getting more corn, so hooray for this idea!) Ratatouille omlettes are also great. This recipe makes plenty so have fun with it!