After today’s raw and rainy day of chores and glow bowling with the boys, I reached for the beautiful bunch of pink radishes for inspiration.  Last week I prepared the radishes from Springdell’s Winter CSA share box #11 in several ways- (serving them in soup, alongside some ricotta cheese, and sweetly pickled). I was reading on the Springdell CSA Facebook page that a Fellow Springdellian enjoys them sliced on bread with homemade butter!  Mmmmm, so many possibilities… With share box 12’s inclusion of honey, I was inspired to try to honey roast them. For anyone that finds the spicy flavor of radishes off-putting, roasting is a great way to make them milder, and the honey combination really sweetens them up nicely.

While they were oven roasting in their honey-butter mixture (for about 15-20 minutes), I thoroughly washed the radish tops, picking out the ones that were not so tender looking (and reserving those for veggie broth).  The tender tops were sautéd in butter on the stove top until wilted. 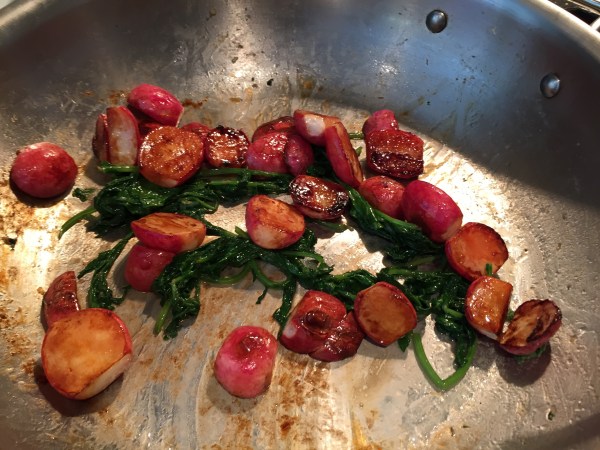 Everything was then tossed together. 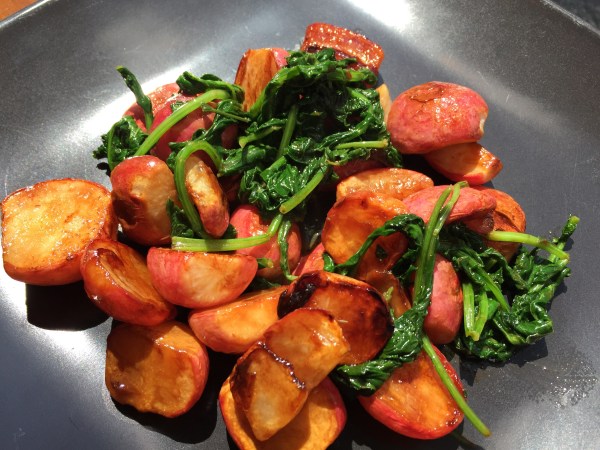 I liked keeping the buttered greens separate from the honey roasted radishes during cooking, then tossing them all together at the end.  I think I would have found the honey to be too overpowering if cooked on the greens as well. 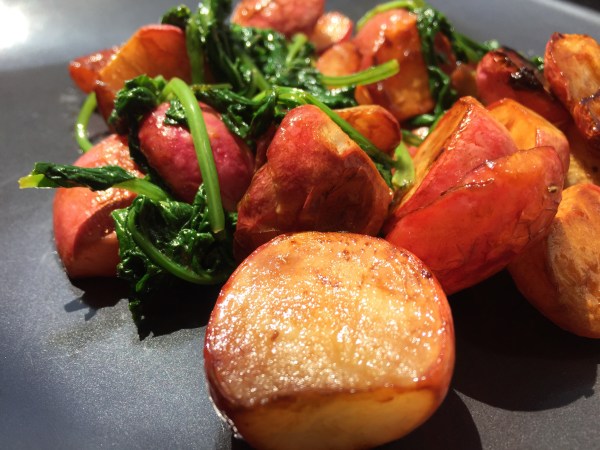 I thought 450 was a good temp for roasting, but you could go a little less if you don’t like the char on a few.  I found them to taste as good as they look.  The full recipe is below!

Next, I made a button mushroom ragout (adapted from a Williams-Sonoma recipe from this book) using the button mushrooms from the share box.  In a saucepan I reduced a cup of veggie broth by about half.  Meanwhile I chopped 2 cloves of garlic and 2 tbsp of the flat leaf parsley.  I started sautéing the scrubebd and halved mushrooms in about 2 tsp of butter and 2 tsp of extra virgin olive oil over medium heat for about 5 minutes. 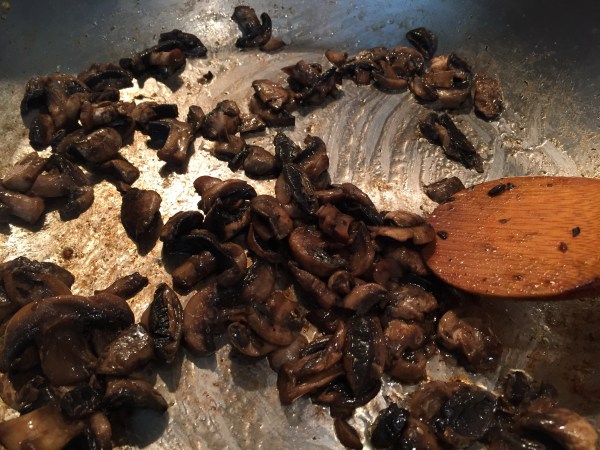 The chopped parsley and garlic were added to the mix, along with veggie broth reduction and 1/4 cup of heavy cream (decadent, I know!) 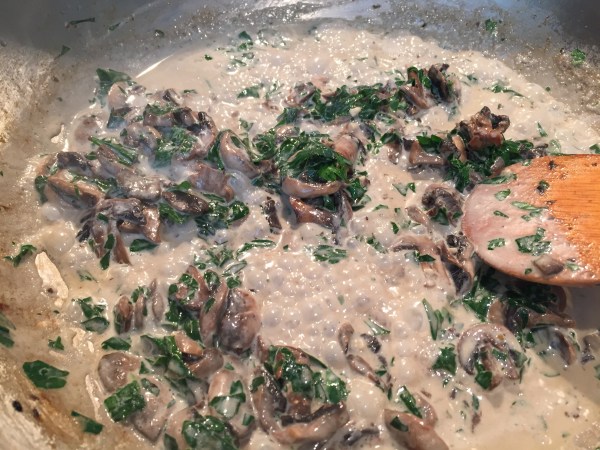 After reducing for a few minutes until thickened, it was ready to scoop and serve! 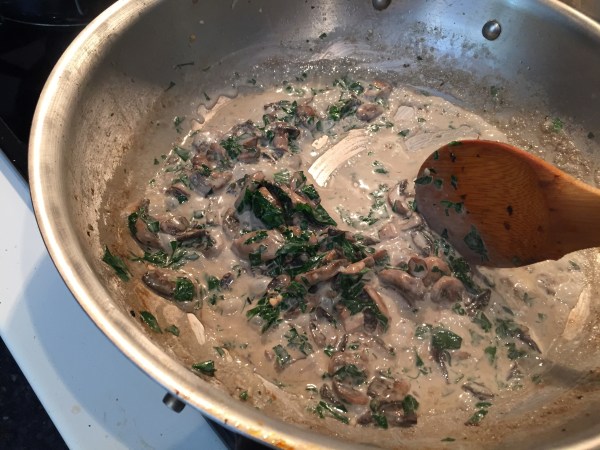 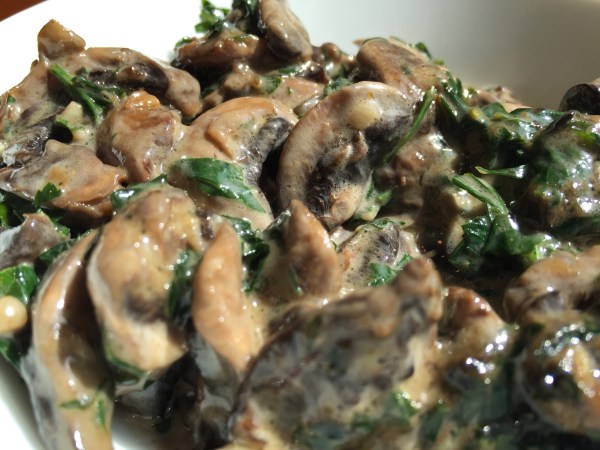 These are so rich and creamy and buttery and saucy, super good.  I feel like a bit of white wine in with the stock and cream reduction would be a good addition for the next time.  These little guys would enhance any pasta, maybe wide egg noodles, linguine, or even quinoa for a protein boost!  Here they are over white rice. 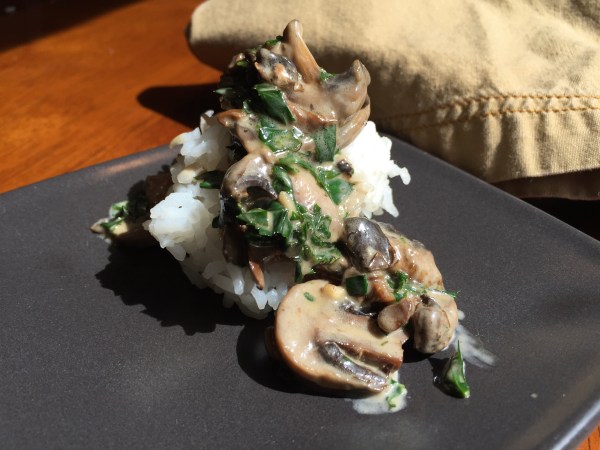 Enjoy and Happy Meatless Monday to you!

This is a wonderful way to enjoy radishes, particularly for non-radish lovers, as the roasting process minimizes the spiciness of the radishes. Making the greens and radishes in the separate sauces really makes a nice contrast in flavor when brought together at the end.

Instructions
Preheat the oven to 450
Scrub the radishes clean and remove them from their tops. Slice them in halves and thirds so that they are all roughly the same size.
Combine 1 tbsp honey and 1 tbsp butter in a bowl. Add the radishes and toss to coat before laying in a non-stick roasting pan. Put in oven and toss every 5 minutes until roasted golden and crisp-tender, about 15-20 minutes.
While the radishes are roasting, rinse and clean the greens, pulling out any tough, yellowed or wilting leaves along the way. Trim off any tough stems. Pat dry.
Heat a skillet over medium heat and add the remaining tbsp of butter, toss in the greens and sauté until wilted and tender, about 5 minutes.
When both the radishes and greens are done, toss together, season with salt and pepper to taste, and serve immediately.