» Jump to recipes using Eggplant as an ingredient 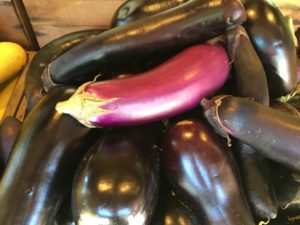 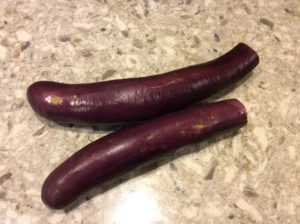 Eggplant is a member of the nightshade family, being related to the tomato and the potato.  These egg or teardrop shaped eggplants range from dark purple all the way to white and even striped in various shades of purples.

Eggplants have a meaty texture. Eggplants are served cooked and are often salted before cooking to remove any bitter flavor the eggplant may have.  A common and popular preparation is to be breaded and fried for eggplant parmesan.

There are many, many varieties of eggplants, ranging from plump to skinny, royal purple to striped to white.

Eggplants can be stored at room temperature for two days, after that it is best that you place them in the fridge where it will last 5-7 days. Keep eggplants cool and out of direct sunlight. If you plan to freeze your eggplant, it needs to be blanched before being frozen.

To remove bitterness eggplant is often salted before use.  Simply rub some salt on the slices and let them sit for a few minutes up to an hour in a colander or place they can easily drain.  The salt can then be wiped or washed off as desired.  This helps to remove any potential bitterness that can sometimes happen with eggplant. 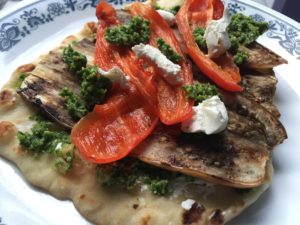 Grilling up eggplant is a great way to prep it for the week’s use.  It can then be layered onto flatbread sandwiches with roasted red peppers, pesto and goat cheese.

When an abundance of eggplant happens, Jess likes to prep hers into cutlets and freeze them for later use.  First, the slices are salted in the process stated above.  Next, they are dipped into a beaten egg and then into a mixture of breadcrumbs and herbs.  Finally they are layed out into a single layer and then frozen.  Once frozen, they can be stacked into multiple layers in a freezer bag. 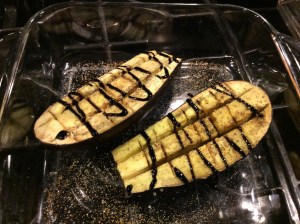 Sarah saw in a magazine about cutting your eggplant like you would a mango, so she gave it a try.  She seasoned with olive oil, salt, pepper, garlic.  Roasted them in a hot oven and drizzled it with balsamic when they came out.  It was really nice how the flavor really sinks into the cuts while roasting.

The quintessential August recipe! This recipe from Alice Waters is Jess’ favorite at the moment. Taking the time to salt the eggplant removes any potential bitterness that may effect the overall flavor of the dish. (If you’re looking for fancy, there are many beautiful layered ratatouille versions out there as well.) This version uses a basil boquet that is removed after cooking, so you can get away with using basil that’s starting to bolt, making it a great end-of-season recipe!

I used both Parmesan and mozzerella for this one, I think the combo is necessary. I also would not skip the roasting step for both the eggplant and the garlic, it adds so much flavor to the dish.