» Jump to recipes using Turnips as an ingredient 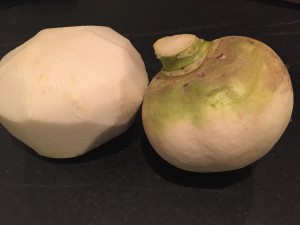 Turnips are root vegetables that are purple and white to slightly greenish in color.

Turnips can be served raw, roasted, braised, or simmered.  Peeling is optional with a turnip and the leafy green tops are edible.  Sautee the tops just like you would leafy greens.  The older the turnip the spicier the flavor and possibly a more bitter flavor as well.

To peel or not to peel?

Jess here. I usually don’t peel the smaller varieties, such as Hakurei (my oldest eats them like apples right out of the CSA box).  However, as they get bigger, their skin holds more of the bitterness that can be off-putting to those apprehensive about turnips, so I choose to peel them. It takes two seconds with a good peeling knife, I’ve read that you can use a veggie peeler too, I just never have. 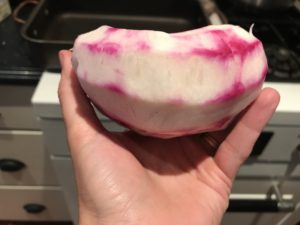 Separate turnips from greens before storing to avoid the bulbs becoming rubbery.  Store turnips in a plastic bag in the fridge for 1-2 weeks.

Hakurei- These turnips are a beautiful white color and round with a sweet, earthy flavor.  Hakurei are great raw or lightly cooked.

Macomber – A delicious varietal of turnip that originated locally in Westport, MA. It’s a cross between a turnip and a rutabaga, and has a pleasant sweet taste, sometimes slightly bitter as they get larger.

Purple Top White Globe Turnips- Usually a little bigger than Hakurei turnips, and they look exactly like their name implies. 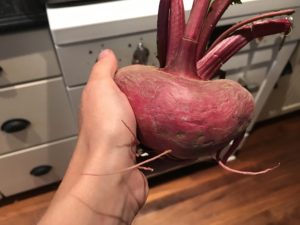 Scarlet Queen Red Stems- The ones coming from Springdell in 2017 are a bit larger, and have a slight radish bite. 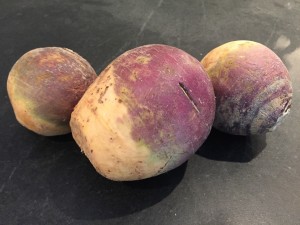 Rutabaga- Jess here. I’ve recently learned from a fellow Springdellian that rutabaga, is sometimes referred to as a wax turnip.  According to the New Whole Foods Encyclopedia, it is also called a Swede or Swedish Turnip. They are actually believed to be a direct cross between a cabbage and a turnip! It has a milder taste that is sweeter than its large turnip relative.  Rutabagas are a great veggie for strengthening digestion and, unlike turnips, rutabagas also contain vitamin A.

Turnip greens are great fresh from the field of fresh frozen! 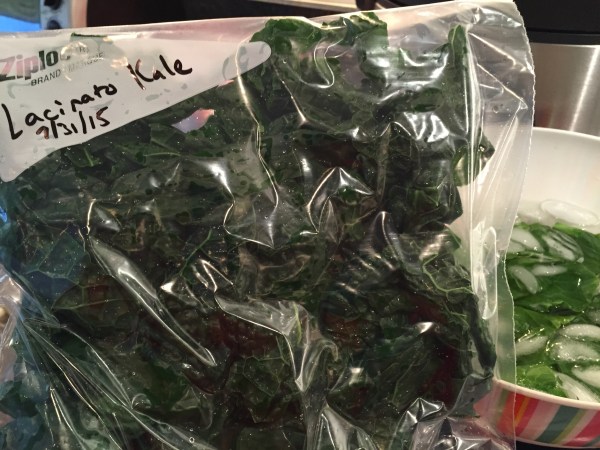 This is a simple and very flexible recipe. Leeks can be easily subbed for garlic scapes, shallots, or onion. This soup has a buttery flavor that develops even more if reheated the next day. The stock is quite flexible as well (I made tonight’s batch with ham hock liquid). It’s creamy and sweet buttery qualities would lend themselves to all kinds of toppings, such as tender lobster or crab. Thyme also works as a garnish. Make it your own and enjoy!

Don’t fear the turnip! This is a great side for all kinds of savory dishes. If making this during the fall season, toss a crisp diced apple into turnips during the last 5 minutes of cooking for a welcome sweet crunch. If it’s the summer season, forego the apple and use the thyme.

Comfort food! When you need a hearty dinner turn to winter veggies and a hunk of crusty bread.