» Jump to recipes using Corn as an ingredient 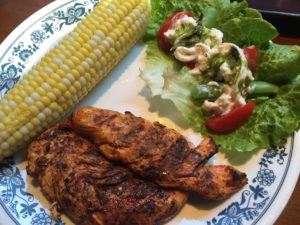 Corn, also known as maize, is a large, common, and hugely consumed plant. When you receive fresh corn on the cob it has green leaves, corn silk, and the cob itself.

Corn can be eaten raw, blanched, grilled both in and out of its husk. For a simple blanch of your corn peel off the outer layers of green leaves, remove the corn silk and place the ears of corn into boiling water.  Turn the water off, cover the pot and let the corn sit for between 5-10 minutes depending on how you like your corn.

At Springdell we are all huge fans of sweet corn, often bread and butter corn, and we have also been given some popcorn!  Cornmeal is also a frequent in the winter share boxes. All of which come from the corn plant.  Farmer Jamie, in an effort to avoid using pesticides, has been rumored to grow a variety of corn that

It is best to use fresh corn immediately, but corn also freezes very well. Blanch the corn, remove it from the cob and freeze in bags. 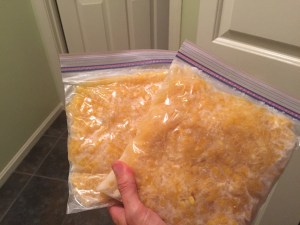 Per Farmer Jamie, if you do not have the time to do that and want to keep it fresh, toss it in a plastic bag with a splash of water. Be sure to keep it in its husk as the husk protects the corn from drying out. Toss it in your fridge. Jess has been known to add sugar to the water if not cooking it for 2 days, as this compensates for some of the sugars that are lost over time.

Pick-your-own herbs, butter and corn are a match made in heaven! 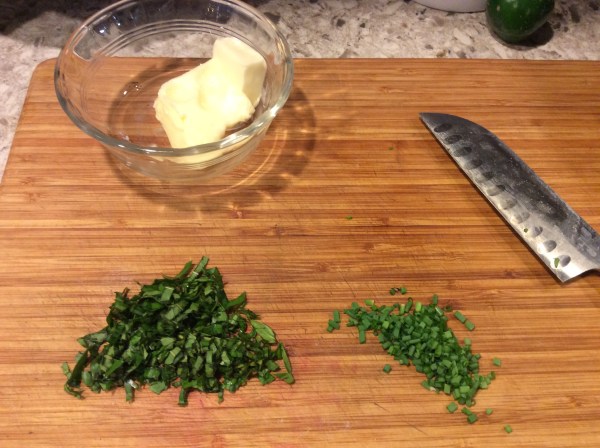 Take about 1/4 cup of butter, softened as well as some herbs (pictured here are very finely chopped chives and basil). 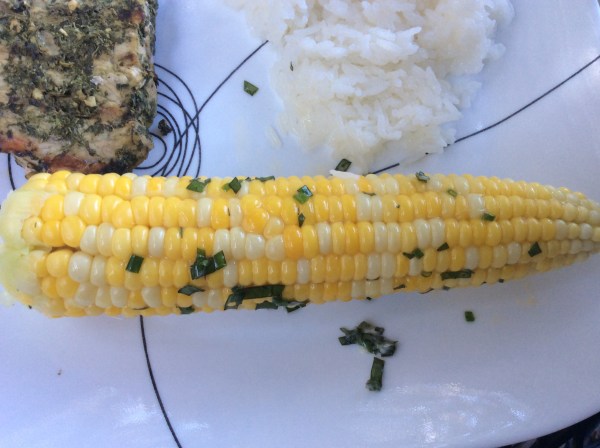 The result is an herb butter to fancy up our corn on the cob! Just a small amount of effort give a huge amount of change to this classic summer veggie! 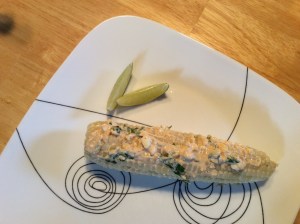 This is another way to punch up the flavor of your corn on the cob.  Sarah made a spread with sour cream, a little bit of mayo, feta cheese, paprika, cayenne pepper, and cilantro.  Spread that on, squeeze a bit on lime on there are you have a winner.

More from Farmer Jamie:
Once you tear the silk of corn to “peek” at it, you are releasing moisture and its sugars. It is why we always suggest folks to keep it dressed. You can tell a good ear without pulling its silk. Pick it up, spin it around, make sure the silk (the brown at the top) is fully closed. Feel the top of the ear….you can tell if it is full or not. Worried about worms? You can see signs of them from the outside if you look…the husk has tears in it and sometimes holes. You may come across something like that and we always suggest folks to look on the brighter side of the situation 1) it means the caretaker of that corn did not over-dose it with crop protectants 2) that bug only ate corn its whole life. Cut off the part it ate (which is usually just the top) and discard it so you can keep the rest for yourself.
Farmers in the retail business refer to folks who tear down the corns husk as “corn strippers” — do not be a corn stripper. Nobody should be a corn stripper. Take a peek at it, sure! We never mind! But pulling the husk all the way to the bottom to see what it looks like is only sending you home with an ear that has already begun to dry out and left a huge mess of corn silk on the display.
Due to the type of growing season we are in, you may come across some corn that has some small, dried out kernels on the tip of the ear. There is nothing wrong with an ear of corn that looks like this…it just never grew correctly because of the lack of water it needed to grow perfectly. The cob that is looking perfect will taste perfect…it is just not ready for the centerfold in the vegetable growers magazine.”

A Springdell Farm recipe from Farmer Jamie! Bacon ends are a perfect item for making chowder…especially for those of you who have some corn in the freezer from your summer share.

Lacos, or “lettuce tacos” can be an easy way to go gluten-free or paleo with your dinner. It’s also fun and delicious, the ingredients are very flexible, it’s more of a concept than a recipe… Next time you get that big leafy lettuce in your garden or your CSA, consider if it’ll make a nice alternative to a tortilla, and if so, prepare your taco ingredients!

This one was shared by fellow Springdellian Dawn DeMeo a great one to use up the last of the seasonal corn, peppers, jalapeños and onion.  The source is Cooks Illustrated, a fabulous local test kitchen.  It’s a wonderful recipe as it’s very flexible in its ingredients, and easy to make your own. Check them out and try this one today!