» Jump to recipes using Cucumber as an ingredient 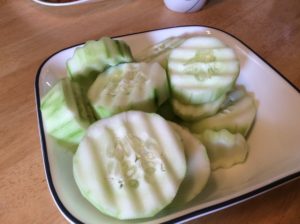 Cucumbers are green cylinders that grow as a creeping vine. Cucumbers have a mild melon flavor and are known for their refreshing taste.

Cucumbers, depending on the type, are eaten raw, often added to salads or dipped in dressings.  Cucumbers are also pickled and preserved.  They are great for juicing due to their large water content.

There are three most common cucumbers:

These cucumbers are large when fully grown and eaten raw. They have a tough outer green skin that can be eaten or peeled off.

These cucumbers are smaller than a slicer cucumber.  They are shorter, designed to fit into jars and onto sandwiches!  You can eat them as is of course, but you can also try your hand in pickling.  Sweet pickles, dill pickles, garlic pickles..they are all great!

Store fresh cucumbers in your refrigerator for about a week.

Cucumbers are mostly water, about 95%. They are most noted for vitamin K.

Overwhelmed with cukes?  Try one of these quick refrigerator pickles to extend their life and add delicious flavor! 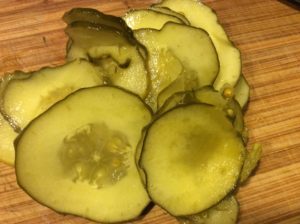 This is Farmer Jamie’s suggestion, from Farmer John’s cookbook. It’s a tasty departure from the cool cucumber, as this one spends time in the oven. Delicious when the basil and cukes are both popping in the fields.

Slaw is so versatile, you can use any spices and veggies too, this one would be a great opportunity to break out some of the frozen summer corn!

Two versions of refrigerator pickles, one with bread and butter sweetness, the other an old fashioned dill.